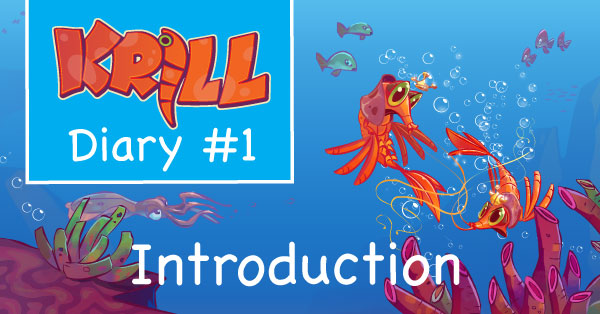 It was a beautiful evening; my children were hanging around looking to do something interesting. We needed a good plan how to finish the day! There was a little vote, and yes, everyone chose movie Happy Feet 2! It was probably a millionth time I watched it; however, the movie was still enjoyable.

During the film, Magda asked me a question: Daddy, why you won't design a board game?

As going back to design and publishing was on my mind for a while, I did like that idea!

It sounds like a good thing to do Magdalena! So what's your idea? - I asked

Maybe create a game about krill! - she answered

And this is how everything began! A start of a tile-lying, strategy tabletop game about krill clans trying to rule the sea! Maybe you think that it's going to be a kiddy board game, but I didn't want to create a children' game! I enjoy designing more complex games; however, I wanted my older girls Magdalena and Wiktoria to be able to have fun with the game as well.

How to make this game challenging to adults and playable to kids aged 10+ was my first challenge. The second one was to keep the game short so it will take up to 30 min to finish. The third one was to balance the luck factor. I don't like games when bad luck can destroy the whole fun. I firmly believe that game should be fun; even when everything goes wrong!

Recently I wrote an article about keeping a Designer Journal / Diary. I'm very keen to share with my readers all things I learned. And here you are - this is the first article from my Designer Diary series. I will share with you all, everything I went through regarding design, preparation for Kickstarter campaign and publishing Krill and why the game looks like it looks! I hope you will find my articles interesting and useful!


Topics I am going to cover in Krill Diary series:

How from a very first unbalanced prototype the game turned into a good working engine. I'll discuss the rules I changed and the reason why they didn't work. I'll tell you about times of euphoria and about times when I was devastated. One day I loved my game, and the next day I thought it's absolutely rubbish and hated it. How did I get to the moment when I could say the game is ready to go! I want to give you a chance to read about the whole process!

How did I test Krill? Who played the game? I'll explain why you can't trust your family and friends regarding testing your prototype. Why I chose a school to test my game. I'll write about meeting with other designers, attending board game group and great playtest meetups at Chance and Counters - board gaming cafe in Bristol. Why connections with right people are so important.

I'll write about cooperation with Marek Roliński, very talented illustrator of Krill board game. With examples, I'll show you stages of illustrations for the game - from the first concept art to the final box cover. The things I did right and wrong. And how to work with such gifted artists respecting their time and dedication. How to avoid miscommunication. And I will talk about the value of double-checking.

I'll explain how I started writing the rulebook for Krill; I'll show versions I made and the final version. Why rewriting and testing of the rulebook is crucial. Why I value so much proofread. I'll talk about cooperation with skilled video reviewer, and talented proofreader Dan King (GameBoyGeek).

I'm planning few more topics; however, I'm not ready to write about them at the moment because a lot of things are still in progress. I'm planning to share with you things like cooperation with manufacturers, development of miniatures, KS campaign itself, fulfilment, distribution, etc.

Which of the topics are most interesting for you? Maybe you'd like me to write about something else regarding Krill?